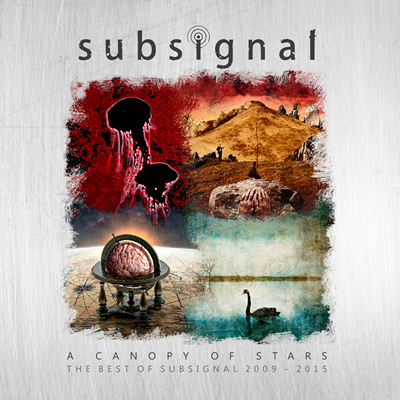 The current album « LA MUERTA » is highly praised by the specialist press. It even entered the official German album charts at position 51. That s reason enough to create a “Best Of” of the first four albums by Subsignal released on Golden Core Records.

In addition to the best songs, this CD also contains the demo recordings from the album « Beautiful & Monstrous », which were previously only available on vinyl, as well as the acoustic version of « Swimming Home ».

The entire artwork of the album was designed by singer ARNO MENSES, the liner notes are written by MARKUS STEFFEN, the guitarist, and the 20-page booklet contains a lot of rare footage. Available as Standard Edition in Digipack and as Deluxe Box Edition in a high quality metal box with SUBSIGNAL BANNER (digital print), Subsignal Plectrum and Magnetic Sticker!